Often, we want to ignore values returned from a method, a typical example is to check if a string can be parsed to another type, for example a bool:

Often, we want to ignore myStringIsABool and we also want to make this variable inaccessible, because is not relevant in the current context and we don’t want it.

C# 7.0 offer a feature called discards, which can be used to achieve this.

Discards are local variables which you can assign, but cannot read from, we can consider them as “write-only” local variables. They don’t have names, instead, they are represented with a specific simble, the _ (underscore). The symbol _ is a contextual keyword, with some limitations:

If we try to use the discard to the previous code, it will be:

Because _ is unreadable, we can’t use its value to assign other variables, it will not appear in IntelliSense and if we try to use it the code will not compile. 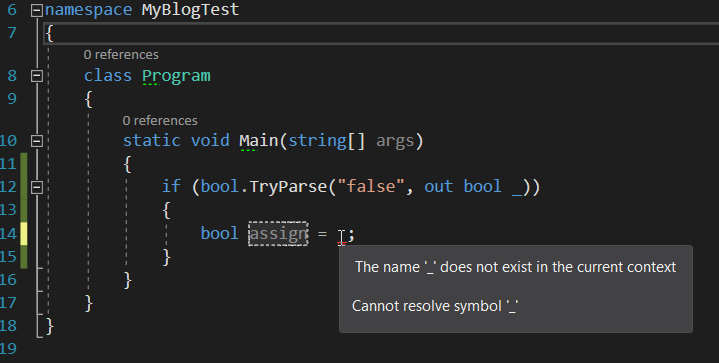 The discards it is a designer feature, the local variable still be required at runtime and the compiler also generate a name for it. This feature is compatible with previous versions of .NET platforms as it does not require a CLR change.